Our worship this Sunday is led by the Moderator of the General Assembly, the Rt. Rev. Dr. David Bruce. We trust you will be blessed through this service.

Come and join us in our Easter Sunday Service of worship and celebration.

EASTER REFLECTION 2. ANDREW GRAHAM IS ONE OF OUR COMMITTEE MEMBERS AND A FARMER. HE SHARES SOME PASTORAL SCENES AND THOUGHTS WITH US.

EASTER REFLECTION 3. One of our members, Stewart Douglas, shares an inspirational story with us this Holy Week

Founded in 1646, we are a varied congregation who seek to know God, Father, Son and Holy Spirit through worship and service. Our worship includes classic hymns and psalms, as well as modern praise items.

Our aim is to be faithful to God, open to others and relevant to the needs of the world.

Bushmills Presbyterian Church is situated on the Main Street of the historic village of Bushmills in County Antrim, Northern Ireland.

Death of the Duke of Edinburgh

Presbyterian Moderator, Right Reverend Dr David Bruce, has written to Her Majesty The Queen to offer the Church’s sincere and heartfelt condolences on the death of her husband and consort, His Royal Highness The Prince Philip, Duke of Edinburgh, who passed away this morning at Windsor Castle, aged 99.

In paying tribute to Prince Philip, Dr Bruce said, “It is with sadness that I learnt of the death of His Royal Highness The Duke of Edinburgh. On behalf of the General Assembly of the Presbyterian Church in Ireland, I would like to offer our sincere condolences to Her Majesty the Queen, and the Royal Family, on the loss of someone who was not only so central to their lives, but a figure who played his part, for over 70 years, in the national life of the United Kingdom and Commonwealth.”

Reflecting on his long life, most of which has been at Queen Elizabeth’s
side, Dr Bruce continued, “Given his service to so many charities and organisations across these islands and farther afield, I am sure that people of all generations, will have been encouraged, helped or inspired by him, not least through his famous award scheme for young people, which bears his name.”

Dr Bruce continued, “Perhaps the greatest and most personal tribute to Prince Philip has, however, already been paid – in 1997, at a lunch to celebrate their Golden Wedding Anniversary. On that occasion the Queen said of her husband, “He has, quite simply, been my strength and stay all these years, and I, and his whole family, and this and many other countries, owe him a debt greater than he would ever claim, or we shall ever know.”

“At this time of bereavement, I pray that Her Majesty The Queen, her family and all who mourn, may know the peace of our Lord Jesus Christ, who is the same yesterday, today and forever, and our ultimate comforter in times of sadness.” 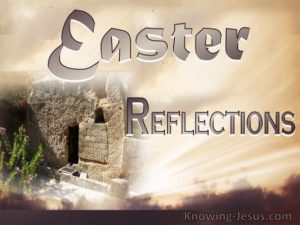 To see our other Easter Reflections